Advertising and marketing spending is poised for substantial growth in 2020.

In a new study, specialist management consultancy Winterberry Group estimates that ad and marketing spend will increase by 7.2% from 2019, reaching $389.5 billion.

A significant portion of that increase will come from political advertising related to the 2020 presidential election, as well as from the Summer Olympics in Beijing, which is expected to boost offline ad spending by 2.3% over 2019 to a total of $223.1 billion, comprising over 57% of overall spending.

Addressable TV should see the largest boost, with Winterberry Group predicting a 44% increase to $2.9 billion. Linear TV is anticipated to see a 1.9% increase to $65.5 billion, making it the largest category for offline spending, followed by experiential/sponsorship, which is expected to increase 3.1% to $48.5 billion in 2020.

Shopper marketing is anticipated to rebound after years of decline, increasing 19.5% for the year to $20.7 billion.

Not every industry is expected to benefit. Magazine ad spending is anticipated to see the largest downturn, decreasing 9.7% to $9.8, with newspaper advertising similarly declining 9.1% to $11.8 billion. Radio is expected to see a slight decline, falling 1.7% to $13.6 billion. 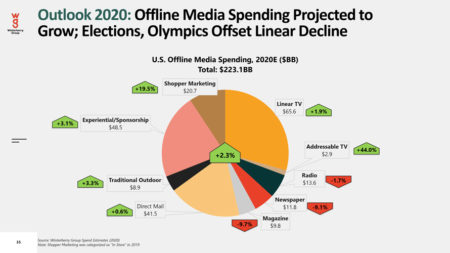 Online advertising is predicted to grow across all categories again in 2020, increasing 14.5% to $166.4 billion. Influencer marketing is predicted to see the highest percentage of growth, with Winterberry Group predicting a 32.4% jump to $3.4 billion. Digital video (OTT/streaming) follows right behind, expected to increase 31.6% to $5 billion. Between influencer marketing and paid social, which is expected to jump 17% to $42.3 billion, social media marketing is poised to comprise nearly 25% of digital spending. Search remains the largest category, predicted to grow 11.2% to $60.9 billion. 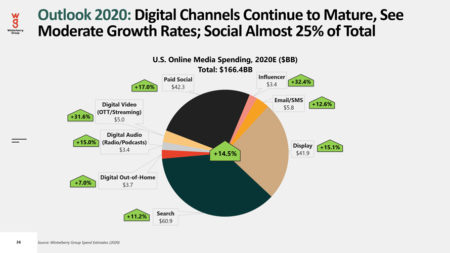 Experiences and technology are the macrotrends

The study also took a look at macrotrends for 2020. Among them are the continued consumer shift to valuing experiences over goods, with Winterberry Group finding 6.3% growth in spending on experiences. Unsurprisingly, brands are splashing out on trying to reach these consumers, with digital customer experience consulting spend expected to exceed $5 billion in 2020. According to the study, the most important attributes to build brand trust were reliability (40%), relevance (32%) and credibility (29%).

Increasingly connected consumers (89.6% of U.S. internet users have a smartphone, and 29.5% have connected cars) rely heavily on online reviews to shape purchasing decisions: 93% of consumers say such reviews impact their purchasing decisions, and 82% say they will read a review before making a purchase online. While 20% of global internet users follow celebrities, real influence usually comes from closer to home: 85% of consumers say they trust family and friends most for product recommendations.

On the brand side, the study looked at the trends of analytics investment and in-housing. The study predicted $6.7 billion in spending on analytics and insights in 2020, with 80% of CMOs increasing spending on predictive analytics. It also found 280,000 positions open for data analysts on LinkedIn. 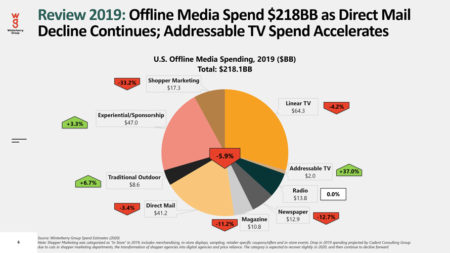 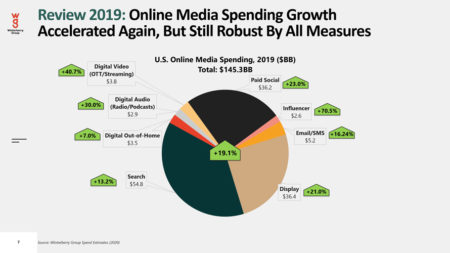 YouTube Will Double Its Original Programming in 2020, Focusing on Documentaries – Adweek

YouTube Will Double Its Original Programming in 2020, Focusing on Documentaries – Adweek