The Wall Street Journal wants you to read “better” and will temporarily remove its paywall in an effort to convince you to pay for its journalism.

WSJ dropped its first widespread brand campaign today for the first time in years in an effort to attract new subscribers by encouraging them to “read yourself better.” As part of that effort, WSJ’s paywall will be lifted, and readers can view an unlimited number of articles on the site for three days. 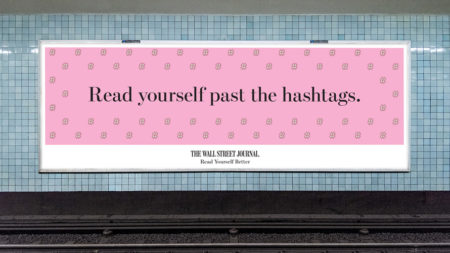 It’s the first major brand campaign to come from WSJ after a 2017 spot featured hard-working women and encouraged readers to “read ambitiously.” In 2015, WSJ’s campaign to “Make Time” featured celebs like will.i.am, Tory Burch and Martin Sorrell, who all made time to read The Journal.

This time around, WSJ focused on encouraging readers to turn to quality and trustworthy news for their information. A narrator encourages you to read past the hashtags, misinformation, angry comments, “troll armies” and overall noise in the 90-second spot. “Because no one ever did anything big by reading small. Read yourself better,” the narrator says as the ad closes and a woman begins walking across the street reading The Journal.

The newspaper at the end of the ad was a symbolic nod to the more than 130-year-old newspaper at the foundation of the brand, said Suzi Watford, WSJ CMO. “We were really clear that everything we create—the quality and the positioning of it—has to be that premium nature. That’s why we spent the time and effort that we did,” Watford said.

WSJ again worked with The&Partnership on the campaign, which took about a year to come together. The spot, which has 30- and 90-second versions, will run on local and cable networks, like NBC and CNN, among others. Out-of-home ads will also appear throughout the country in L.A., Denver, Philadelphia and N.Y. encouraging readers to “Read yourself past the hashtags,” “Read yourself to your own opinion,” and “Read yourself out of your comfort zone.” New York will also have two murals related to the spot.  The spot will run across social and digital platforms, and a print ad will appear in Fortune magazine. 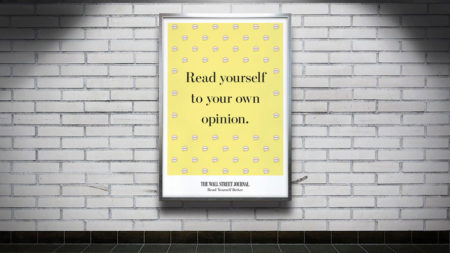 The campaign is an additional push for more subscribers after reaching more than 2.6 million subscribers in both digital and print as of last quarter. “It’s less about commentary on the political undertones and more commentary on an age of misinformation,” said Agnes Fischer, president of The&Partnership.

Other leading publishers, such as The New York Times, have used their own brand campaigns to show its reporting process in its recent “The Truth Is Worth It” campaign. The Washington Post’s ad during the Super Bowl paid tribute to journalists reporting on big historical events.

“The best work is work that you look back on and it’s still relevant today. … What’s enduring, and how do we deliver that in a really timely fashion?” asked Justin Ruben, ecd The&Partnership.

How B2B Marketers Can Build Their Personal Brands on Social Media