If you’ve had it up to here with political posts and discussions on social platforms, you are not alone, according to Pew Research Center.

A recent Pew survey of U.S. adults found that 46% of social media users feel “worn out” by the number of political posts and discussions they encounter on social networks, up nine percentage points from the last time Pew asked the same question, during the summer of 2016.

Meanwhile, 15 percent of respondents like seeing political posts on social media, while 38% didn’t feel strongly one way or the other. 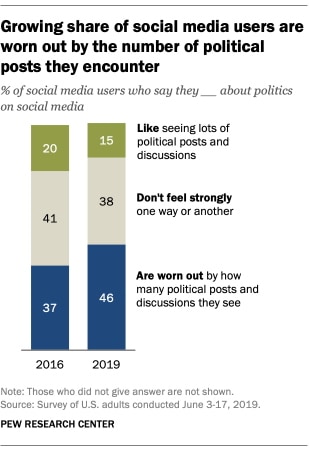 Pew senior researcher Monica Anderson and computational social scientist Dennis Quinn wrote in a blog post, “Well over a year before the 2020 presidential election, many social media users in the U.S. are already exhausted by how much political content they see on these platforms.”

The research group also broke out its findings by race and political affiliation.

Pew found that 52% of white social media users said they were worn out by political posts, while just 36% of nonwhites expressed the same sentiment.

Republican and Republican-leaning independents were also more likely to say they were fatigued by political content on social platform than Democrats and Democrat-leaners, at 51% and 43%, respectively.

Pew also found that 68% of social media users find it “stressful and frustrating” to discuss politics on social media with people they disagree with, up from 59% in 2016, while 27% said they found those interactions to be “interesting and informative,” down from 35% three years ago.

Some figures that didn’t change from 2016: 67% of social media users said discussing politics on social media with people they disagree with has led them to find out that they have less in common politically than they originally thought, while 26% reported the opposite.

Pew said the percentages were virtually equal among Republicans and Democrats. 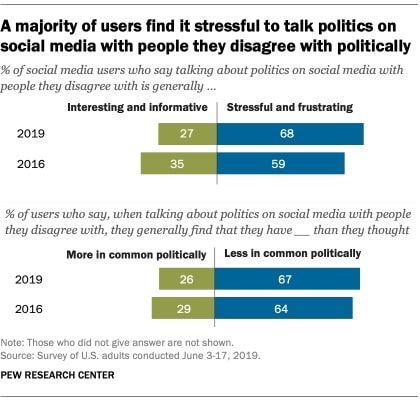 5 Ways LinkedIn Advertising Is Different from Other Social Platforms