National Geographic is about to get its biggest spotlight yet under its new parent company, Disney. 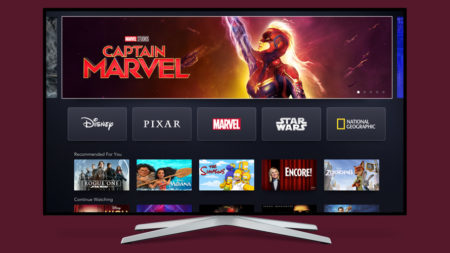 In the Disney+ layout, National Geographic receives its own tile alongside the other Disney family brands. “It’s quite exciting, and also very intimidating,” said National Geographic Global Networks president Courteney Monroe. “Those are some incredible brands, with a staggering quality of content. So the bar is really high.”

While Monroe’s mandate hasn’t changed since Disney bought National Geographic and most of 20th Century Fox’s other assets in March—though she says the countless opportunities Disney offers to scale the brand are “daunting”—Disney+ has given her a new platform to create programs for.

When the OTT service launches on Nov. 12, alongside new Star Wars and High School Musical series and a robust Disney library, the platform will feature The World According to Jeff Goldblum, a new docuseries that had initially been developed and announced for National Geographic in summer 2018.

At that time, the Disney-Fox deal was still several months from closing, so “there was no opportunity at Disney+,” said Monroe.

However, The World According to Jeff Goldblum is the only National Geographic program for Disney+ that wasn’t developed for the platform from the start.

“Anything else that we’re now developing or already in production for, for Disney+, was conceived originally for Disney+,” said Monroe. “The emergence of that as a pipeline for us has in no way changed our programming on the channel. We are still producing the same amount of programming, the same genres of programming for the channels, the same number of hours. It’s just additive.”

As it develops a show, Nat Geo is focused less on which platform it will be best for than “does this have the potential to be a great show that lives up to our brand,” said Monroe. “Because no matter where it sits, it’s a National Geographic show, and we have a very specific brand.”

Once that has been settled, then Monroe and her team will decide whether National Geographic or Disney+—which Nat Geo is a “supplier” for—is a better fit for it.

National Geographic’s transition from Fox to Disney this year has been “very smooth and positive,” said Monroe, in part because Peter Rice—Walt Disney Television chairman and co-chair, Disney Media Networks—also oversaw National Geographic when it was part of Fox.

Plus, “our strategy and our brand are so well-aligned with Disney,” said Monroe. “The only thing that has been challenging is the amount of opportunity to scale the brand across all the Disney business segments. There’s so many opportunities; it’s a bit daunting.”

As part of the move to Disney, Monroe is also working with a new ad sales group. “I feel that we’re in such capable hands with [Disney ad sales chief] Rita Ferro and her team,” said Monroe. While there aren’t any new brand partnerships to announce yet, “I find we are in a lot more portfolio pitches now.”

How Challenging Depression Can Cultivate New Pathways to Freedom

Featured Snippets: What to Know & How to Target - Whiteboard Friday

The Ultimate Guide to Personal Selling