You know a marketing trend is nearing the end of its cycle when a major brand both mocks it and embraces it.

Back in 2017, McDonald’s launched a limited-edition line of branded apparel called The McDelivery Collection to let you flaunt your love of fries while jogging or slip into a burger-bedazzled onesie. And two years before that, there was a whole line of Big Mac regalia, from blankets to boots.

But now, as rivals continue to make headlines with items like the streetwear-savvy KFC bucket hat, McDonald’s has decided the branded fashion craze has officially moved into the realm of parody.

As part of the launch of the brand’s Spicy McNuggets, Leo Burnett London created a faux fashion line called Schnuggs (a portmanteau of spicy chicken nuggets, of course) for a new ad that draws a parallel between the hot nature of grab-it-while-you-can apparel collaborations like Supreme and the long-demanded spicy version of the chain’s classic McNuggets (available in the U.K. until Sept. 24).

The spot is aimed at the 16 to 24 demographic, which begs the question of whether mocking a trend that’s popular among your target demo is the right way to go. But one could argue that this approach gives Gen Z some credit for being able to laugh at the way so many companies have tried to reach them with supposedly hip apparel.

“We drew inspiration from these cult-like brands that have this young audience going crazy for their latest product,” says Graham Lakeland, creative director at Leo Burnett London. “Therefore, creating a spoof ‘hype beast’ clothing brand to model our new Spicy McNuggets felt like a great fit. This, coupled with a mixture of food-focused posts, helps us create a buzz to become one of the most talked-about foods this year.”

McDonald’s obviously isn’t the only brand to do a spoof fashion line. Dunkin made fun of the trend with its supposed line of Espresso-Wear, which featured “Cappu-chinos” and “Americano-veralls.” (Truth be told, we’re still bummed these weren’t real).

But Leo Burnett London isn’t putting all its metaphorical eggs in the fake-fashion basket. The agency also created a fun teaser campaign in the Metro newspaper, where ads over multiple pages showed the nuggets burning a hole through the paper (click the image below to see a full-sized version): 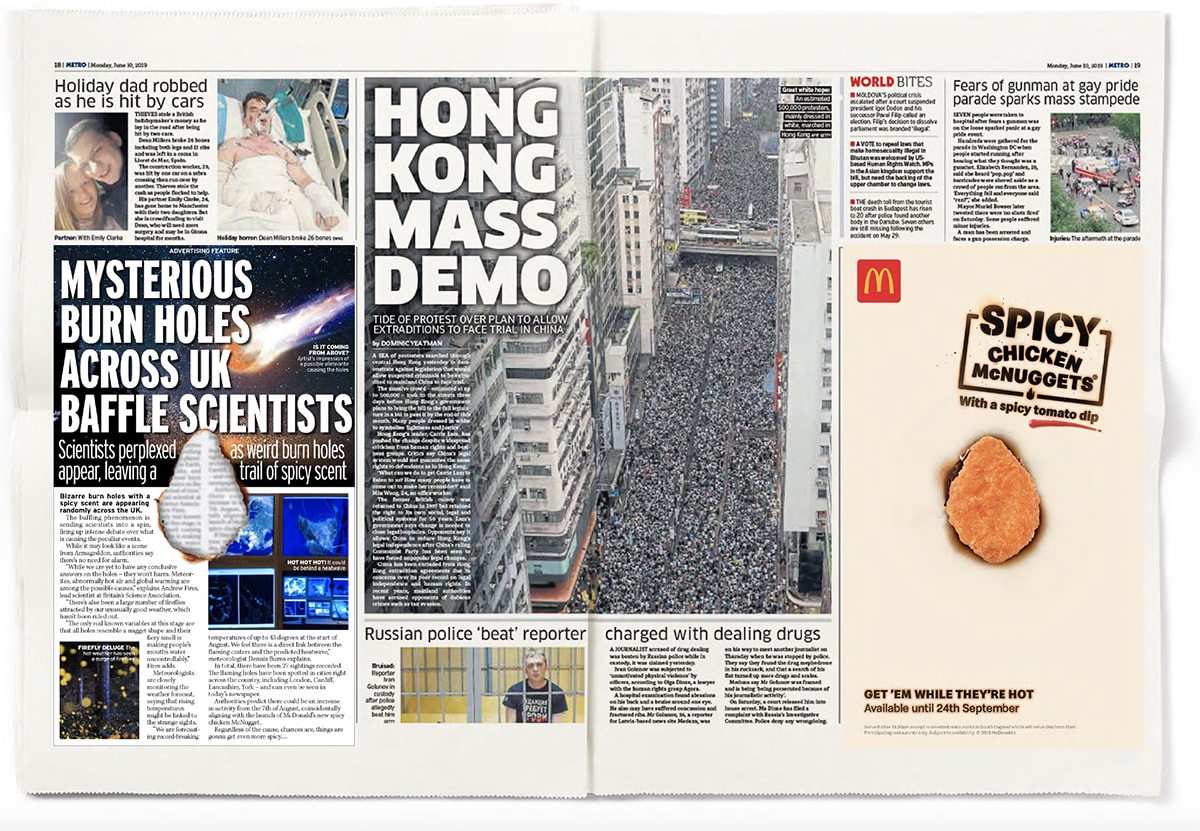