IHOP wants TikTok users to let its syrups do the talking or, more accurately, the singing.

TikTok users are encouraged to have their IHOP syrup bottles “sing” along to its frenzied version of holiday classic “Silent Night,” called, “Not So Silent Night.” Dancing and other creative or silly actions are welcomed, too.

IHOP will feature its favorite videos with the #SyrupTurnUp hashtag on its TikTok channel. 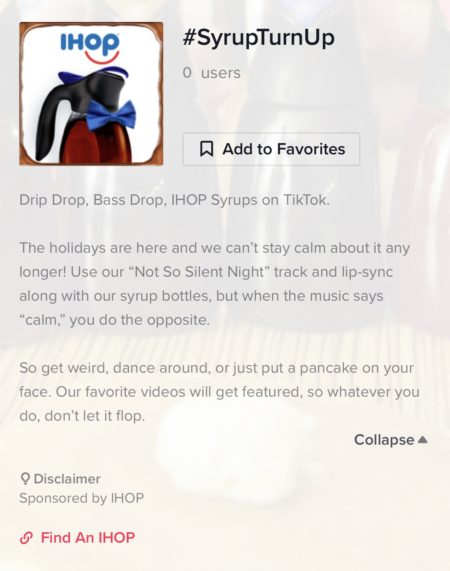 IHOP was named one of Generation Z’s Most Loved Brands by Morning Consult last year, and videos featuring its singing and lip-syncing syrups have already made their mark on TikTok and drawn attention from the mainstream media.

The restaurant chain is seeking to tap into user-generated content and build buzz and conversation about its brand, although #SyrupTurnUp will help boost traffic at its locations, as well, with people presumably heading to its restaurants in order to capture videos with its syrups.

No one could’ve predicted how the pandemic would turn things upside down and lead to a change in customer behavior....