I Tried a KFC Doughnut Sandwich, and Here’s What You Need to Know – Adweek

What if we haven’t been living through a short-lived chicken sandwich war, but in fact are experiencing the first days in a glorious Chicken Sandwich Golden Age?

When the Popeyes chicken sandwich went from viral phenomenon to sold-out status in a mere week, we at Adweek assumed things would quiet down for a while. But KFC came back with a three-punch publicity combo of announcements: plant-based “chicken” wings, a video game that lets you date Colonel Sanders and, today, a “Kentucky Fried Chicken and Donut” selection.

According to Business Insider, the doughnuts are being tested in 40 locations across Norfolk and Richmond, Virginia, and Pittsburgh.

One small problem: I’m not in any of those places. But did I let that stop me from trying this mystical combination? Dough I did nut. Wait, that sounds really, truly bad. Anyway, no, I refused to let this geographical obstacle stop me.

Since I’m not sure what kind of glazed doughnut KFC is working with, I decided to give them the benefit of the doubt and go with one of the best: A classic Krispy Kreme. 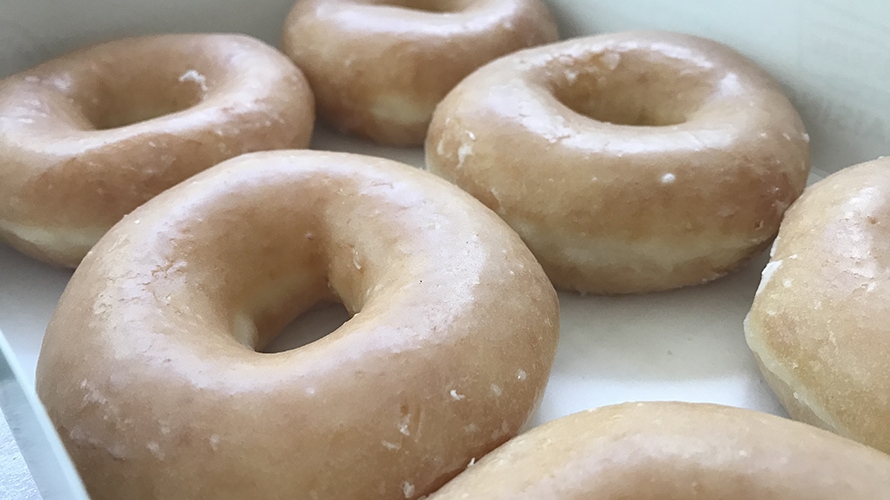 Doughnut buns acquired (which is 100% going to be my catchphrase if I’m ever in a fighting game), I headed over to KFC and grabbed two Crispy Colonel sandwiches, which seemed like a reasonable base to work from. 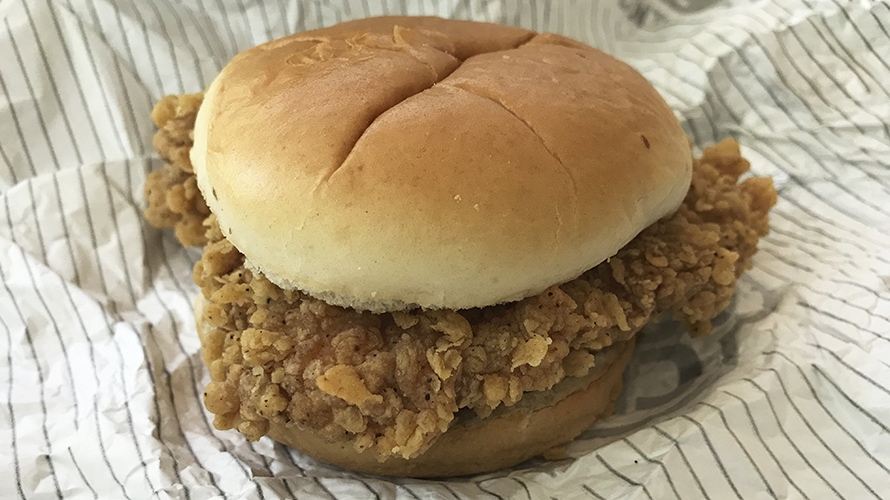 Now all the pieces were in place. It was time to start building my edible altar to man’s folly. 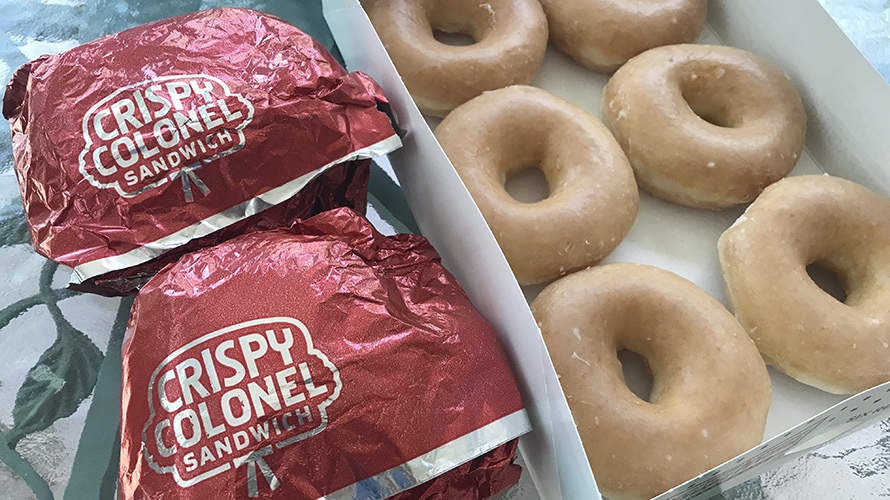 If you’re going to try this at home—and please do, because otherwise it seems weird that I did it—this is when you’re going to face an important branch in your decision tree: Do I keep the mayo and pickle on there? I definitely did, partly for texture and mouth feel and partly just because what am I going to do, wipe down this slab of fried chicken?

So, pickle and mayo, welcome to the party.

Assembly is pretty easy, as you might imagine. Drop that fried chicken on one doughnut (bottom side facing up to be the lower bun, of course), then slap a Krispy Kreme cap on it.

If you plan to Instagram the experience, now’s a good time to pause, because that doughnut isn’t going to get any puffier and more photogenic once you start getting all grabby with it. Enjoy the fleeting puffiness, because soon that thing is just going to be a compressed mess of sugar and poor life choices. 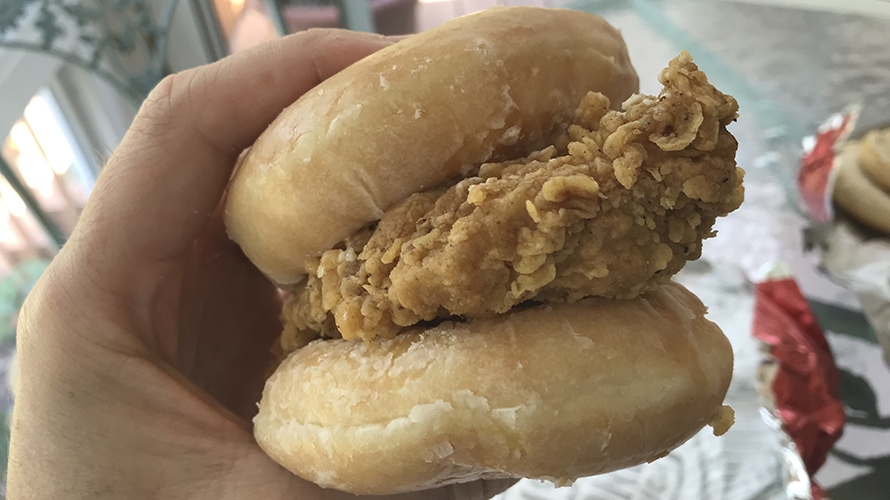 Now we’re talking! That kind of looks like food! That’s probably what mom and dad envisioned when they gave me those savings bonds to help with journalism school!

Only one thing left to do: 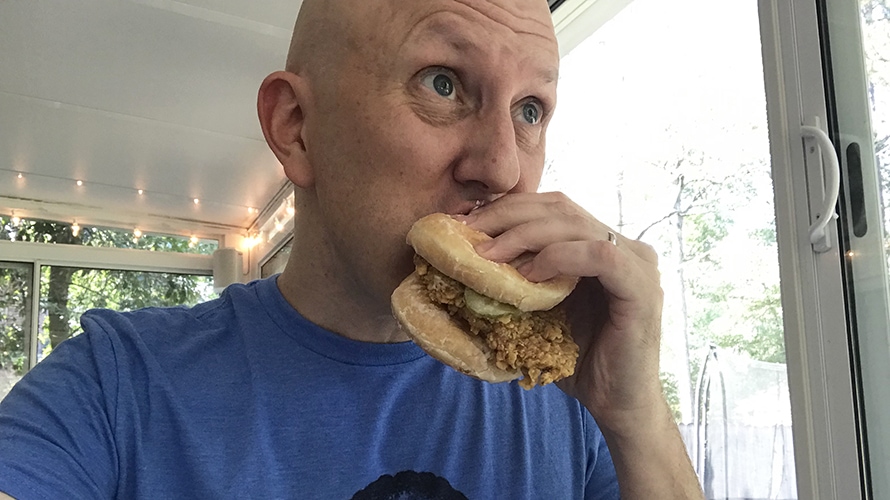 (I’m so excited to picture that being the photo Politico runs when I announce my candidacy for office some day.)

The first bite isn’t bad, but it’s certainly not the best either. The outer edges of the sandwich, which are usually my favorite bites, are a bit too crispy and salty to mesh well with the flavor and texture of the doughnut. And speaking of the doughnut, it’s a bit too puffy in those early bites, making it an ineffective bun and a bit of a jaw-stretcher to get around.

By the third or fourth bite, it’s actually a pretty solid combination. I miss the maple flavor that your brain expects when you have a lifetime of chicken and waffles behind you, but the sweetness definitely goes well with the chicken.

I didn’t even mind the pickle and mayo. The mayo mostly vanishes, though it probably adds a bit of tang—not to mention some much-needed fat content to this veritable kale buffet—and the pickle adds its usual notes of crunch and tartness.