Director of governance and global affairs Brent Harris released a charter for the board, as well as a letter from Zuckerberg, and he detailed how the board will select, review and decide upon content appeals by users, slated to start in the first half of 2020.

Zuckerberg said in his letter, “This charter brings us another step closer to establishing the board, but there is a lot of work still ahead. We expect the board will only hear a small number of cases at first, but over time, we hope that it will expand its scope and potentially include more companies across the industry, as well.”

Harris said the board will prioritize appeals based on the following indicators:

Harris also focused on four key areas of concern while crafting the design of the board.

He said the majority of experts consulted by Facebook favored an independent trust, both to ensure the board’s independence and to provide additional accountability checks. The trust provides the infrastructure to both support and compensate the board.

The goal in terms of membership is to choose a diverse and qualified group of 40 to serve three-year terms. In order to ensure that Facebook does not name all 40, the company will tap a small initial group, who will then be tasked with filling out the seats. All members will be formally appointed by the trust.

Panels are expected to defer to past decisions, reflecting the feedback Facebook received during its public consultation period. The board can also request that its decisions be applied to similar cases. 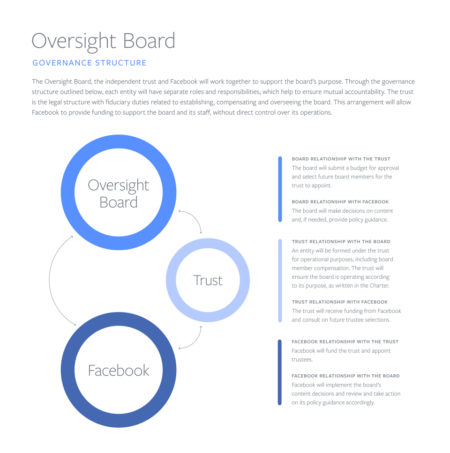 Zuckerberg wrote in his letter, “We are responsible for enforcing our policies every day, and we make millions of content decisions every week. But ultimately, I don’t believe private companies like ours should be making so many important decisions about speech on our own. That’s why I’ve called for governments to set clearer standards around harmful content. It’s also why we’re now giving people a way to appeal our content decisions by establishing the independent oversight board.”

Vice president of global affairs and communications Nick Clegg said in the Newsroom post, “The content policies we write and the decisions we make every day matter to people. That’s why we always have to strive to keep getting better. The oversight board will make Facebook more accountable and improve our decision-making. This charter is a critical step toward what we hope will become a model for our industry.”

And Harris wrote, “While today is an important milestone, there is much more work we still need to do. Over the next few months, we will continue testing our assumptions and ensuring the board’s operational readiness. In addition, we will focus on sourcing and selecting of board members, finalizing the bylaws that will complement the charter and working toward having the board deliberate on its first cases early in 2020. We are committed to consulting outside experts at every step, and we look forward to providing more updates on our progress.”