Believe it or not, Amazon did not create the mid-summer sale with Prime Day. Instead, it took a pre-existing concept, rebranded it, and now, according to figures from savings site RetailMeNot, as many as 250 other retailers are following suit.

Each retailer, of course, adds its own spin—staring a day earlier, ending a day later, stretching it out for a week or more, reminding shoppers they don’t charge membership fees or offering in-store pickup. And the names run the gamut, including Deal Days, Crash Sale, Great American Tent Sale and “Black Friday in July.”

But all these Prime Day rivals illustrate once again that where Amazon goes, retail follows. 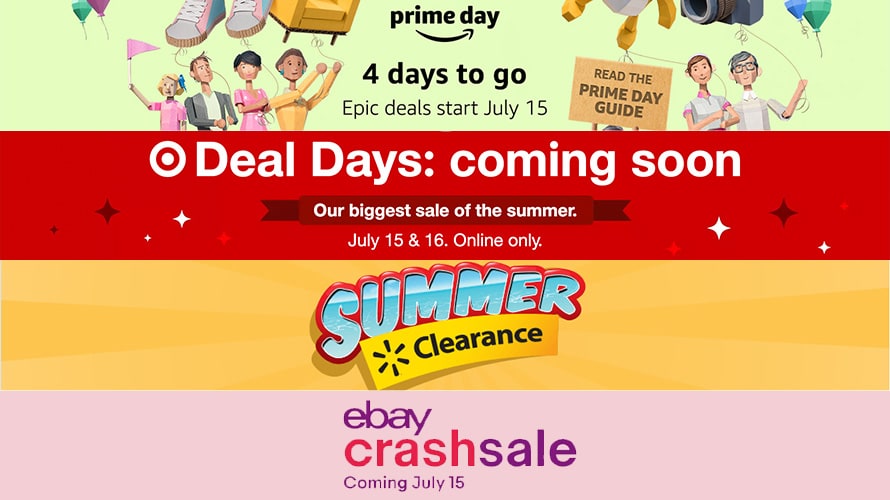 Case in point: The retailers themselves don’t have much to say about how they plan to compete.

A spokesperson for Walmart, for example, said it will offer summer savings July 14 to 17, including online-only deals on an HP laptop and a Dyson vacuum. When asked how the retailer plans to distinguish its sale from Prime Day, she said, “I provided comment about our savings.”

Similarly, a rep for Target declined to discuss its Prime Day battle plan beyond a quote in a press release, which cited additional discounts compared to prior years plus pickup options—and, of course, no membership fees. (All valid, but, to be fair, Target can’t boast a Taylor Swift concert.)

According to Michelle Skupin, marketing and communications director at RetailMeNot, these retailers are holding their cards close to their chests because they don’t want competitors to catch wind of their plans, but she “definitely [thinks] there’s more strategy behind it” beyond just copying Amazon. (Though she concedes the timing of some of these sales “speaks volumes.”)

And while Amazon is likely the biggest competitor of virtually every other retailer peddling a summer sale, it did a favor to the industry as a whole by training consumers to anticipate deals in July—and, most importantly, to shop for them. So even though other retailers may not be No. 1 on shoppers’ lists on July 15 or 16, they may still be No. 2, No. 3 or No. 4.

While coming in second or third is not ideal, it has paid off. According to analysis division Adobe Digital Insights, online retailers see an increasingly strong halo effect on Prime Day, with an expected revenue lift of 79%—which is up from 60% in 2018.

“Amazon is a big enough gorilla to create something that can change people’s perception of what they should be doing on a hot July day.”

Customer relationship management firm Salesforce found digital commerce revenue outside Amazon grew 60% on Prime Day 2018 compared to the year prior. It’s also expected to grow this year, but by a smaller margin as “Prime Day loses a bit of its newness factor and goes on longer than ever before,” said Rob Garf, vice president of strategy and insights for retail and consumer goods.

“All retailers have the same problem in July…people are at the beach and in vacation mode, not shopping mode,” said Allen Adamson, co-founder of marketing services firm Metaforce and adjunct associate professor at the NYU Stern School of Business. “What has changed is Amazon is a big enough gorilla to create something that can change people’s perception of what they should be doing on a hot July day.”

Once Amazon makes a move, he said, other retailers would be foolish not to respond—and it’s “incredibly likely other retailers will try to catch the wave, jump on and see if they can catch some sales Amazon doesn’t suck up.”

Skupin agreed summer sales are “something the entire retail industry has glommed onto.”

“It’s really not unlike what happened with Cyber Monday many years ago,” she added. “It’s really kind of an industry creating the success of what Amazon did for themselves and making it their own.”

0 0 votes
Article Rating
Share
Facebook
Twitter
Pinterest
WhatsApp
Previous articleHow To Check If The Google Core Update In June 2019 Broke Your Ranking
Next article5 Ways Retailers Can Fight Back Against Prime Day. Could One Be Amazon’s Achilles Heel? – Adweek