Trick or treating was joined by National Breast Cancer Awareness Month and Diwali among holidays and events on both platforms.

The entertainment category on Facebook last month was paced by Ellen DeGeneres and Joaquin Phoenix, while Phoenix and Lizzie McGuire led Instagram.

The people category was topped on both Facebook and Instagram by the late Rep. Elijah Cummings (D-Md.) and late actor John Witherspoon.

The hottest Hot Topic in the brands and products category on Facebook in October was Fortnite, while Instagrammers were feeling charitable, discussing March of Dimes and Habitat for Humanity.

Finally, in the food and drink category, Vietnamese food sated the appetites of Facebook users last month, while Instagrammers wasted away again in Margaritaville.

Facebook IQ measured subjects that drove disproportionately high volumes of discussion on both social platforms, marking the latest in a Facebook-Adweek Hot Topics monthly series that began in 2015.

Check out the data-based graphics below to learn more about recent, topical social trends: 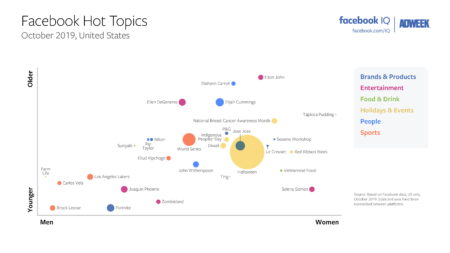 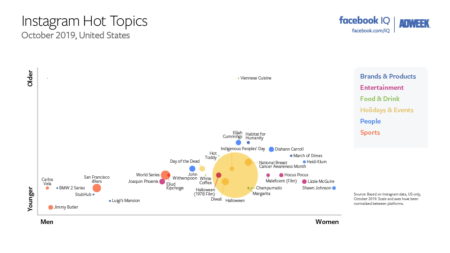 Paid search trends to watch for the 2019 holiday shopping season

Paid search trends to watch for the 2019 holiday shopping season

What They Are Compared to POs & Invoices

7 Soft Skills Every Salesperson Needs to Get Ahead

Inside B2B Influence is a show that goes behind the scenes of B2B marketing and showcases conversations with insiders from...