Google Has Updated Quote Searching to Focus on Videos

In August of 2017, I wrote the post Google Searching Quotes of Entities. The patent that post was about was called Systems and methods for searching quotes of entities using a database.

Reviewing the Patents on quote searching

It appears that this patent is showing us that Google is paying more attention to indexing audio, and that shows in this updated patent.

Here is a comparison of the claims from the patents.

The first claim from the 2017 version – Systems and methods for searching quotes of entities using a database:

If you want to read about how this patent was originally intended to work, I detailed that process when I wrote about the original granted patent that was granted in 2017. The continuation patent was filed in 2017 and was granted last spring. The first version tells us about finding quotes looking at knowledge graph entries. The phrase “knowledge graph” was left out of the newer claim, but it also tells us that it is specifically looking for audio content, and performing analysis on audio content to collect quotes from entities.

What this update tells me is that Google is going to rely less upon finding quote information from knowledge base sources, and work upon collecting quote information from performing audio analysis. This seems to indicate a desire to build an infrastructure that doesn’t rely upon humans to update a knowledge graph but instead can rely upon automated programs that can crawl content on the web, and analyze that information and index it. This does look like an attempt to move towards an approach that can scale on a web level without relying upon people to record quotes from others.

I am seeing videos at the top of results when I search for quotes from movies, and that have been reported upon in the news. Like President Trump referring to a phone call he had with the leader of Ukraine as a “perfect phone call.” 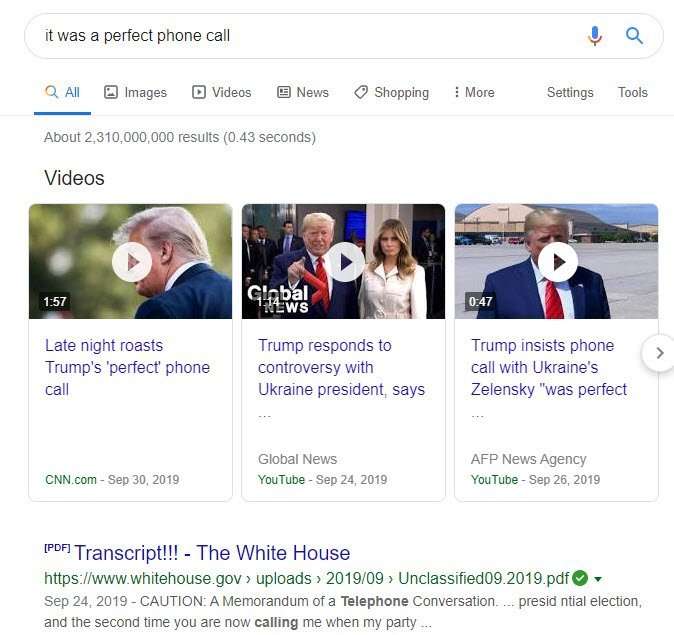 Note that Google is showing videos as search results for that quote.

I tried a number of quotes that I am familiar with from history and from Movies, and I am seeing at or near the top of search results videos with those quotes in them. That isn’t proof that Google is using audio from videos to identify the sources of those quotes, but it isn’t a surprise after seeing how this patent has changed.

Has Google gotten that much better at understanding what is said in videos and indexing such content? It may be telling us that they have more confidence in how they have indexed video content. I would still recommend making transcripts of any videos that you publish to the web, to be safe in making sure content from a video gets indexed correctly. But it is possible that Google has gotten better at understanding audio in videos.

Of course, this change may be one triggered by an understanding of the intent behind quote searches. It’s possible that when someone searches for a quote, they may be less interested in learning who said something, and more interested in watching or hearing them say it. This would be a motivation for making sure that a video appears ranking highly in search results.

The 2020 Martech Career Study: Please tell us more about your work