Facebook Introduces a New Portal, Along With Portal Mini and Portal TV – Adweek

Facebook is looking to kick-start sluggish sales for its Portal video-calling device with Wednesday’s introduction of three new models, as well as the addition of calling via its WhatsApp messaging application and making the devices available in more countries.

The social network unveiled Portal in October 2018, with the flagship Portal device priced at $199 and the larger Portal Plus selling for $399.

However, market research firm Strategy Analytics estimated that Facebook had shipped fewer than 300,000 Portal devices globally as of the end of June, putting its share of the U.S. smart speaker market in the second quarter of 2019 at just 1%, well behind Amazon, Google, Apple and Sonos.

The company debuted a redesigned Portal Wednesday, along with the Portal Mini and Portal TV.

Facebook said its new Portal has a 10-inch HD display, while the Portal Mini comes in at eight inches, and both devices support video calls, photos and videos in portrait or landscape orientations.

The social network added that the devices’ adaptive display adjusts color and brightness base on its surroundings so that video calls, photos and videos appear natural, and both devices have built-in speakers for music.

Meanwhile, Portal TV brings video calling to the television screen, with users still having the freedom to move around during those calls and still be seen and heard. 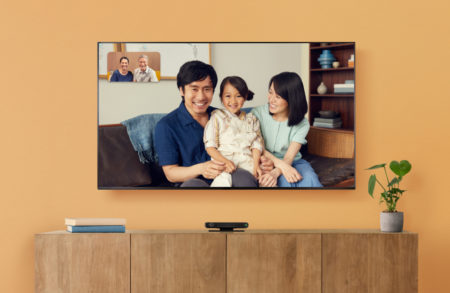 All three devices are available for pre-order in the U.S., Canada and Europe, via the Portal site, as well as select retailers including Amazon and Best Buy. 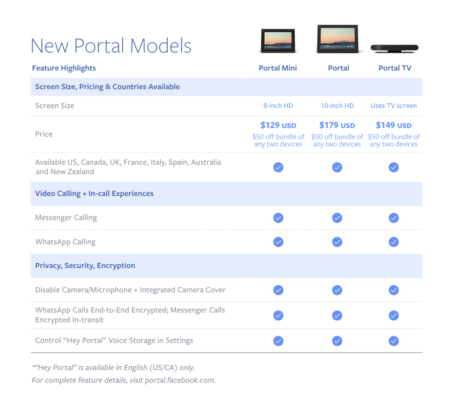 Portal was only available in the U.S. for its first few months of existence, with Canada added in May.

The social network said in a Newsroom post detailing all of its Portal updates that the devices are coming to the U.K., France, Italy, Spain, Australia and New Zealand.

Video calling via WhatsApp was also added to the new Portal devices, joining the existing capability to do so via Facebook Messenger, and all WhatsApp calls made via Portal devices are end-to-end encrypted.

As far as security and privacy, Facebook said the Smart Camera and Smart Sound technology on its Portal devices uses artificial intelligence tech that runs locally on those devices, and not on the social network’s servers.

The company added that when people use the “Hey Portal” voice-command functionality, their devices send short audio recordings and transcripts of those interactions to Facebook so that the company can improve the response of its voice services.

Users can view, hear and delete those voice interactions in their Activity Logs, and they also have the option of going into their settings and turning off voice storage altogether.

Facebook vice president of consumer hardware Andrew Bosworth said at a press event to introduce the new devices, “Even with the first generation of Portal, you were able to review and delete those voice interactions at any time. We’re now adding the ability to disable storage of voice interactions altogether,” as reported by Lucas Matney of TechCrunch.

The three new devices carry over some features from the initial Portal and Portal Plus.

Their AI-powered Smart Camera technology enables people to move around the room and stay in frame, while Smart Sound enhances the voice of the person speaking and reduces background noise.