Could That GIF Get You Sued? – Adweek

The best brand marketers on Twitter are often praised for how human they sound and how much modern social savvy they bring to their posts.

But sometimes there’s a moment where even the biggest brands are reminded that they’re not like everybody else. They’re companies aiming to profit off their content, which means the rules of the road most of us follow as everyday civilians don’t always apply.

Case in point this week: GIFs and videos that originate on TikTok.

The smartphone video app has become the hottest platform of the moment and is having a noticeable impact on pop culture, as best illustrated by the explosive popularity of meme fueler Lil Nas X. And like Reddit or Tumblr before it, TikTok’s most popular content is spilling over into other platforms, like Twitter.

When Tomlinson spotted Pizza Hut repurposing her viral video on Twitter in a post about whether it would launch a new pizza in the coming month, she called out the brand, and her supporters backed her up. 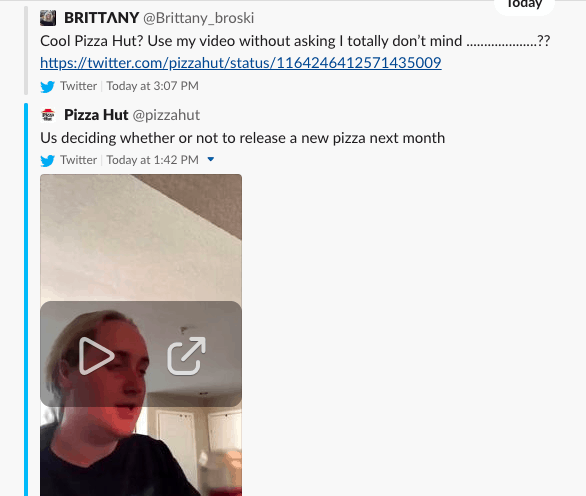 Way to take something without permission @pizzahut

Once again, after taking away my chocolate dunkers, you’ve disappointed me.

CREDIT FOR THE GREATEST GIF OF ALL TIME: @Brittany_broski

Pizza Hut deleted the tweet within a few hours of posting. Adweek reached out to the brand for comment but has not yet received an official response about the tweet. This story will be updated if we hear back.

While the incident was fleeting and quickly quelled by the brand deleting the post in question, it did—or should—raise some alarm bells about the potential for seemingly innocuous posts to become legal liabilities.

To help offer some guidance to marketers, Adweek reached out to Michael McSunas, a veteran attorney who specializes in advertising law. Way back in the dark digital ages of 2013, we talked to McSunas about the potential legal minefield of GIFs, which were just beginning to be added to social platforms beyond Tumblr. But the internet’s come a long way since then, so we felt it was time for a 2019 refresher.

Here’s what McSunas, a former lawyer for Fiat Chrysler who’s currently in-house counsel for sweepstakes and incentive marketing firm PrizeLogic, had to say this week about what marketers should keep in mind when using GIFs and similar repurposed content in social media:

Adweek: Who owns the rights to a GIF?
Michael McSunas, general counsel, PrizeLogic: There are probably multiple “rights owners” involved with the GIF. There is the copyright holder, who is most likely the creator of the original work; the rights of publicity would belong to anyone who is shown in the GIF; and, possibly, the creator of the GIF, if the GIF is deemed to be a transformative or permissible derivative work under copyright law.

So for instance, if the GIF is from a movie or TV show, you may need permission from whoever owns the copyright to the TV show, as well as permission from anybody appearing in that GIF. A new wrinkle these days are sites to which consumers upload content and which consumers give all ownership rights to that site. For example, the recent hubbub over the “Russian” app that people were using to age themselves. Apparently, the terms of that app allowed the app to use your image however they wanted–without your consent or compensation. In that case, the app would own the copyright and the right to make GIFs out of your image or video.

There is also the issue of fair use. If a court would deem your use of a GIF “fair use,” then you would not need permission to use the GIF. However, if you are using a GIF for commercial purposes, it may be difficult to argue that your use was fair use.