One of the more notable elements in the marketing campaign for 2017’s It was the creation of a house from the story that was available for visitors to enter and explore. The Neibolt House, constructed on a Los Angeles street corner, was an immersive experience where people could be guided through the twists, turns and jumpscares by Georgie, the little boy whose disappearance acts as an inciting incident in the story.

With It Chapter Two hitting theaters this week Warner Bros. is once more pulling out an experiential marketing execution meant to make the movie’s story a tangible reality for fans. As is often the case with sequels, this time, things are even bigger than they were the first time around.

The new movie, based on the second half of Stephen King’s 1986 novel, is set 27 years after the events of the original. When children in Derry once again start to go missing the now-adult members of the Losers Club return to their hometown to end the menace of Pennywise The Clown.

As seen in the trailer, some of the movie’s story takes place at Derry Canal Days, a carnival celebration of the town that includes a creepy funhouse used by Pennywise to torment the grown Bill (James McAvoy) and find new victims.

That funhouse—and the event as a whole—provided inspiration for Warner Bros. when the studio wanted to once again bring part of the movie to the corner of Hollywood and Vine in Los Angeles. With the goal of creating a broad, immersive experience where visitors could walk in and get a feel for the story, planning began while the movie was still in production and involved creative input from the filmmakers. Additional work on the mechanics of the location was provided by Experiential Supply. 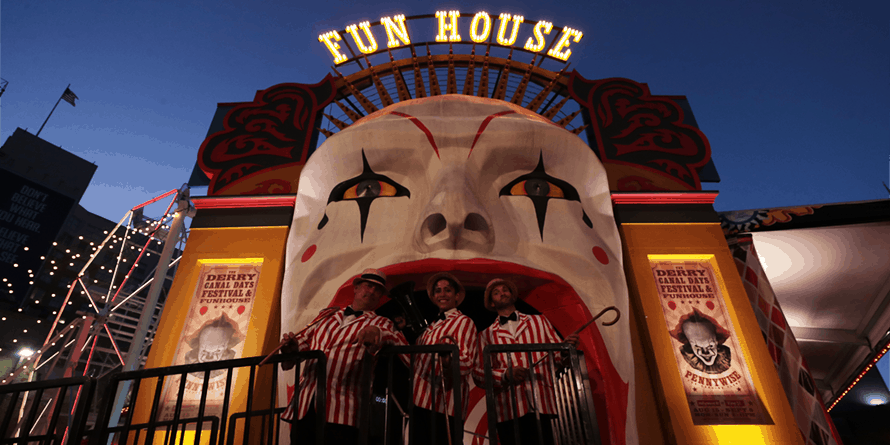 The result is a miniature version of Derry Canal Days in the middle of L.A., with the funhouse as the central element. Planning ahead allowed the studio’s marketing team to save the funhouse facade used during production for what’s being called The It Experience.

Announced in July, The It Experience includes 10 themed rooms, eight of which are directly inspired by scenes from the movie including the hall of mirrors and restaurant glimpsed in the trailer along with the sewers haunted by Pennywise. Visitors are guided from room to room by a carnival barker while actors play other characters that heighten the experience. 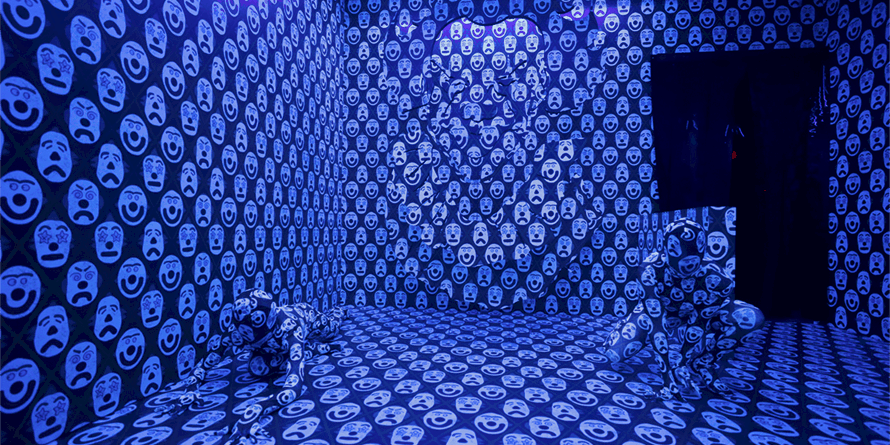 As was the case for the Neibolt House in 2017, tickets for the experience—which opened Aug. 15th and ran until yesterday—were free and available on a first-come-first-served basis. But the demand this time was even stronger. With the first one, it took seven hours to sell out, but according to the studio, tickets were gone in just 31 minutes. Those without tickets could wait in a standby line, but the average wait time for that was nearly five and a half hours.

There were ways to get around that, though. TMZ’s Celebrity Tour of Hollywood added Derry Canal Days as a stop, with people able to use their tour bus tickets to access an exclusive line to the event. Sponsorship by IMAX allowed similar preferred access for those purchasing advance tickets to see the movie in the expanded format.

Of course, attendees were asked to exit through the gift shop, featuring a Hot Topic pop-up where all kinds of movie merchandise were available for purchase. The retailer even offered its own video look at the experience.

Just as the event itself seeks to immerse the audience in the world of the movie, promotions for The It Experience have embraced the in-world conceit. Trucks hauling materials to the site for assembly were decked out as if they were bringing a carnival to town. Ads run by iHeartMedia both on the radio and in outdoor locations like bus stop benches have sold Derry Canal Days as a real happening, not one designed to promote the movie.

While Warner Bros. wants to sell The It Experience as a scary good time —that’s the focus of reaction videos from both the studio and AMC Theaters—the goal of audience immersion in the town of Derry is one that is seen throughout the whole campaign for the movie. The first teaser features adult Beverly (Jessica Chastain) learning about the history of Pennywise from a longtime resident. A 360-degree video on YouTube took viewers through the funhouse in the same way a similar video for the original took them through the sewers. The social media campaign involving the cast blurred the lines between our reality and the movie’s story.

The It Experience offers another example of how the horror genre often pushes movie marketing in new and exciting directions. While other movies have recreated scenes as part of an experiential campaign, the goal here is to inspire strong feelings—particularly fear and its subsequent adrenaline rush—in the audience, creating a more profound and long-lasting connection with the brand that will then hopefully turn into not just action but advocacy.

How to Integrate Keyword Mapping into Data Studio