Moviegoers at a screening of Rogue One: A Star Wars Story in Los Angeles Saturday night got much more than a film and some popcorn.

Facebook’s Oculus virtual reality division teamed up with cinematic theater experience provider Cinespia to debut a four-minute immersive experience that enabled attendees to experience all the bells and whistles of VR without a headset.

Wareheim’s Reality character also interacts online with people, via social and digital channels, commenting on his struggles with VR. And people can play with stickers and GIFs of the Reality character.

We are especially excited about where we’re going with VR right now,” Rebecca Van Dyck, chief marketing officer of augmented reality and VR at Facebook, said in an interview. “This is a super-exciting time for VR in general. VR has been a tethered headset since its inception, and Quest is the first time we’ve had a stand-alone experience—a fully immersive experience without being tethered to a computer.”

Oculus and Cinespia transformed the historic Los Angeles Theatre with lasers, projectors and practical effects, and Oculus said this event marks the first time these technologies were combined together to demonstrate the scale and impact of VR.

“What if you were in a room that was just taken over by the whole experience?” Van Dyck said.

The event began with a 2D video of VR rhythm game Beat Saber, followed by a transition to 3D movement and sound for a look at popular VR adventure game Moss, which climaxed with a battle between Quill, the game’s mouse hero, and a slithering snake. 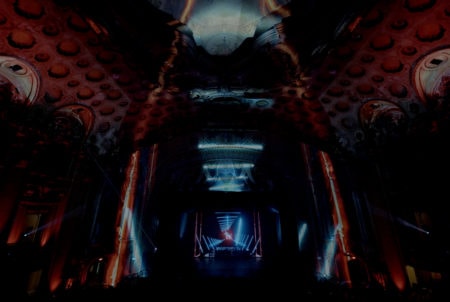 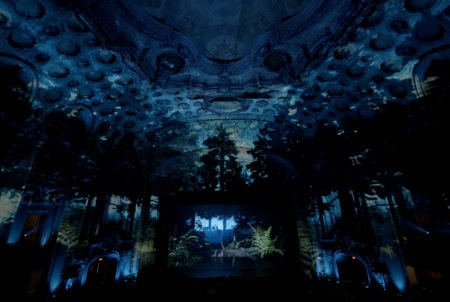 The next stop was zero-gravity sports game Echo Arena, for which the theater was transformed into an orbital space station, where 3D characters engaged in combat. 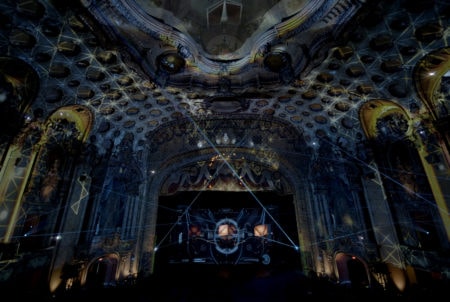 Finally, tying in with the movie that they came to see, Darth Vader appeared and used the power of the Force to make the theater walls crumble and lava gush through the cracks. 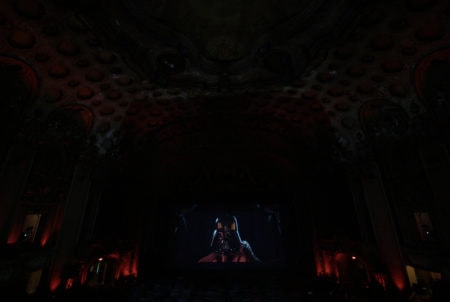 Following Rogue One: A Star Wars Story, guests were invited to try out Vader Immortal: A Star Wars VR Series on the Oculus Quest, as well as to explore the Los Angeles Theatre—which is rarely open to the public—complete with full bars and concessions, a DJ dance party in the ballroom and Cinespia’s custom photo booth.

“Vader Immortal was perfectly suited to the experience before watching Rogue One,” Van Dyck said.

Oculus said the process of creating the VR experience took eight weeks, and it worked with engineers, programmers and designers from VTProDesign.

AKQA San Francisco was the agency behind the event, and it was directed by Bradley G. Munkowitz (GMunk).

They took a 3D scan of the building and created a 16K by 8K resolution spherical map powered by 22 high-powered projectors, adding in 16 lasers to map out the venue space in greater detail and create volumetric beam and aerial effects, including a set of custom lasers that projected out into the crowd.

The engineers built a custom hologram mesh screen to provide the illusion of 3D objects floating around the stage, adding a jumbo LED video screen to enhance the holographic effects by producing a parallax effect.

Finally, the team added to the digital effects with actual effects, such as fog and confetti, to simulate in-game particle effects.

A custom audio solution was developed using 22 channels of audio and custom tracks.

Oculus’ campaign is “a really unique concept to help express what makes VR great, Defy Reality,” Van Dyck said, adding that the company is “taking it to next level for the holiday season.”

Do They Help or Hurt Your SEO?

For over 20 years, SEOs and content marketers have built links across the web to get their content in front...