While a record 40 million people have tuned in to watch the third season of Stranger Things since last week’s debut, a smaller but impressive subset of the sci-fi thriller’s fans have been busy playing an alternate reality game based on the show’s themes of Russian espionage.

The game, Operation Scoop Snoop, began last week and features an “alternate universe of Russian spies, uncrackable codes and a mind-bending video game.” But there’s a catch: It can only be played with 1985 technology. And it’s sponsored not by the Scoops Ahoy ice cream store from the show, but by Baskin-Robbins.

Instead of traditional apps or websites, Baskin-Robbins and its agency partners 22squared and m ss ng p eces spent months developing an intricate narrative that requires players to use TelNet, a precursor to the internet that was first developed in 1969 before going mostly out of use in 2007.

The secret entrance to the game is hidden within a 1980s-themed ad for the USS Butterscotch and features two of the show’s stars that work in the ice cream store. At the end, a 1-800 phone number appears.

When someone calls it, an automated voice welcomes the caller before asking if they’d like information on the flavor of the month, the store location or an “important message” from the legal department. When the legal message is selected, a cheery voice issues a somewhat cryptic but dismissive message: “You may have noticed unusual symbols on the USS butterscotch flavor label situated on the glass case in Scoops Ahoy and Baskin-Robbins stores,” she says. “It’s not part of the covert operation as some have reported. Please disregard it entirely. Thank you, and ahoy!”

David Nagel, senior director of consumer engagement at Baskin-Robbins, said Netflix originally reached out to the ice cream brand in April 2018 to see if they wanted to collaborate on a promotion for the season. They discussed the potential of special ice cream flavors but then realized it could do more. That then led to also transforming the Baskin-Robbins location in Burbank, California, into a Scoops Ahoy store from the show.

While the ice cream store itself has drawn a crowd, it’s the ARG that’s been the runaway hit. The narrative includes some themes from the show while also incorporating actual news events that were happening in the real world’s 1985 like nuclear testing, what was happening to Russian physicists and reported UFO sightings. 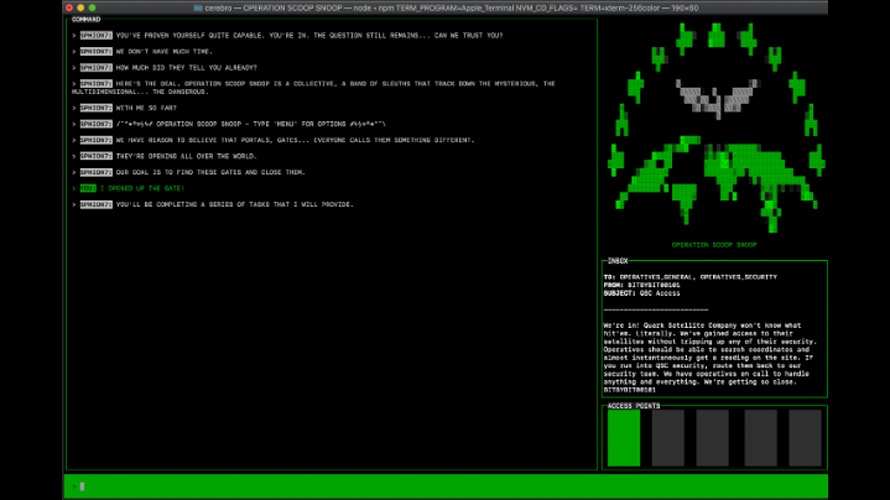 To make the game, developers had to learn to use SSH servers and old code.

Most of the game requires the use of phones and fax machines rather than mobile apps or emerging tech like augmented reality. However, a critical part of the backend of Scoop Snoop is actually a chatbot developed by Hexagram that interacts with each player while also remembering their name and where they are in the mission.

It’s also allowed the game’s creators to explore their own rabbit holes. To make it work without browsers, developers had to learn to use SSH servers and old code that many hadn’t ever thought of using in the past.

“There’s a brilliant kind of anachronism where everything looks 1985 but underneath there’s this insane 2019 chatbot,” said Mike Woods, director of immersive content and executive creative director at m ss ng p eces.

To develop the script, the team hired an experienced ARG writer who wrote more than 160 pages of story that had to be approved by the writers at Netflix. New material is being released every 24 hours with no finale in sight until someone cracks the code. And while there are some brand tie-ins, they’re intentionally subtle.

How agencies can use Kanban to manage client work