Amazon Gets Rattled as Calls Grow for Reform – Adweek

It’s not often we see Amazon lose its cool. After all, this is the company that faced criticism about selling potentially biased and inaccurate facial recognition technology to law enforcement agencies and didn’t break a sweat. Nor did it bat an eyelash when 8,000 employees asked for it to take a stronger stance on climate change. And, at its annual shareholder meeting in May, proposals tied to both issues were squashed like proverbial bugs.

On Tuesday, however, which should have been the big finale of the longest Prime Day to date, Amazon’s mask slipped a bit as it included some zingers in its statements about striking workers, the unions supporting them and the politicians calling for an investigation into its fulfillment centers. And this was before the European Commission announced its own investigation into if Amazon is using third-party data to give itself an unfair advantage.

The Strike: ‘We can only conclude that the people who plan to attend the events are simply not informed’

To be fair, just about a week ago, Amazon announced it is footing a $700 million bill to “upskill” 100,000 U.S. employees to “help them move into more highly skilled roles.” That came after raising the minimum wage to $15 in November 2018, which is a feat unmatched by its retail peers so far.

And yet warehouse workers in Minnesota nevertheless went on strike on Monday with shirts and signs saying, “We’re humans, not robots.”

Minneapolis’ Awood Center, a community organization that seeks to build economic and political power within Minnesota’s East African community, helped to organize the strike. Executive director Abdi Muse was not available for comment. However, in an email, he wrote that he expected about 100 workers to participate. And, according to the organization’s Twitter account, which Muse said is a good resource, workers were protesting working conditions and unfair scheduling.

In a statement from the Retail, Wholesale and Department Store Union (RWDSU), which would represent Amazon workers if they unionized, president Stuart Appelbaum wrote that the toll on warehouse employees this Prime Day will be “considerably worse” than a typical day given changes like the 12-hour sale extension and shift to one-day shipping, which “effectively doubles the pace of its workers.”

“Amazon fulfillment workers were already facing speeds of 200 to 300 orders per hour in 12-hour shifts before the new policy,” he added. “They were struggling to maintain that pace … Operating at these speeds for this duration means Amazon needs to hire more workers, under more sustainable speeds that don’t put worker’s lives in jeopardy.”

The Union: ‘These groups are conjuring misinformation to work in their favor’

Chelsea Connor, director of communications at the RWDSU, acknowledged the $700 million jobs program, but said “the other issues in our statement still need to be addressed.”

This comes as Amazon looks to hire at least one employee relations manager with “seven years direct experience in … union avoidance work, or labor/employment law with an emphasis on union avoidance.”

When asked about the listing on Tuesday, an Amazon spokesperson said, “I’m unfamiliar with the post.” She requested Adweek forward the link “for reference.” She did not respond thereafter.

“I think that says it no more clearly than I could,” Connor said. “Amazon doesn’t want a union.”

By Wednesday, the language referring to “union avoidance” had been deleted from the job listing. 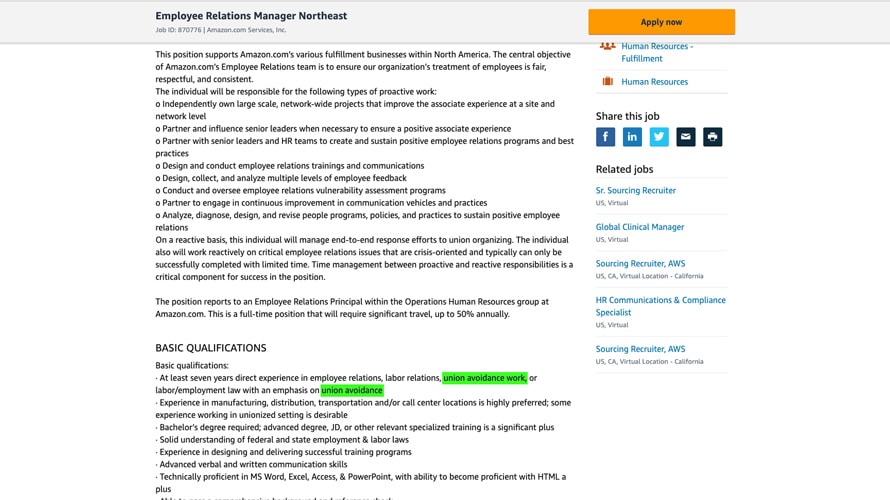 Earlier, however, the spokesperson confirmed no Amazon employees are part of a union. And, in an emailed statement, she wrote that events like Prime Day are an opportunity for its critics, like unions, to “raise awareness for their cause.”

“These groups are conjuring misinformation to work in their favor, when in fact we already offer the things they purport to be their cause—industry-leading pay, benefits and a safe workplace for our employees,” the spokesperson added.

According to the spokesperson, “We can only conclude that the people who plan to attend the events are simply not informed,” and she encouraged “anyone to book a tour of our fulfillment centers and compare our overall pay, benefits and workplace environment to other retailers and major employers in the community and across the country.”

In response, Connor said RWDSU, which has worked to unionize Amazon workers at a facility in Staten Island, would welcome a tour, pointing to multiple reports on the grim state of affairs within, such as ambulances being called to U.K. warehouses 600 times in three years and nearly 200 calls to 911 from U.S. warehouses over a five-year period because of employees who had attempted suicide or were having suicidal thoughts.

The process to unionize in the U.S. is complicated compared to other nations and varies by state. And while Connor said she could not disclose RWDSU’s organizing targets, the union has been talking to Amazon and Whole Foods workers broadly for well over a decade.

“When we talk about the retail industry, for a long time, it was a career job—we have members who have been members 30-40 years—they’ve been members their entire lives,” Connor said. “But the economy is changing and more and more workers are in warehouses and what happens is they are not treated with dignity and respect. The main issue in warehouse versus a retail store is health and safety issues, like break issues, heating and cooling issues.”

In addition, as the gig economy grows, Connor said workers are seeking more stability in terms of paid time off and sick leave.

The Lawmakers: ‘If [they] really want to help the American worker, they should focus on passing legislation that raises the federal minimum wage’

Meanwhile, lawmakers called on the Department of Labor to “immediately investigate chronic violations of workplace safety at all Amazon warehouses.”

In response, Amazon issued another invitation to Senator Bernie Sanders to see for himself that Amazon’s commitment to safety is “a fundamental principle across our company.”

In particular, Amazon called out U.S. Representative Ilhan Omar who “did not raise concerns in the months following her tour of our Minnesota facility.”

What Amazon fails to mention is Omar is now leading a group of 13 members of Congress alongside Sanders in calling on the aforementioned investigation into a work environment at Amazon that “creates a high risk of physical injuries … [including] a “disturbing pattern of preventable deaths.”

“Amazon workers often work in overheated facilities without air conditioning. They fear taking bathroom and water breaks for fear of retaliation,” Rep. Omar wrote in a statement. “Workplace injuries are often ignored—sometimes leaving workers homeless or bereft of income. There are multiple reports of deaths of Amazon workers on the company’s watch. No worker should be treated like this.”

Amazon said the allegations in the letter “are not an accurate portrayal” and noted its buildings are safe enough for 6-year-olds to tour.

The final clue Amazon was feeling rattled is its closing line: “If Rep. Omar and Sen. Sanders really want to help the American worker, they should focus on passing legislation that raises the federal minimum wage—$7.25 is too low.”

And that, funny enough, is exactly what CEO Doug McMillon said in response to Sanders’ call for a living wage for Walmart workers during its shareholder meeting.