Huge initially created Hooha, the world’s first smart tampon dispenser that launched in March, to provide an alternative to the antiquated, coin-operated vending machines often found in public restrooms. But the text-activated device was also based on an employee’s idea to emphasize why the tech industry should include more women in product development, especially for tech specifically created for them.

Hooha is the brainchild of Stephanie Loffredo, associate director of social marketing at the global digital agency. Loffredo pitched the idea in Huge’s fellowship program and assembled a team of colleagues to create the machine in house.

“The fact that the tampon machine hasn’t evolved like everything else is blatant evidence of period stigma and the gender gap in tech.”

The machine now has the potential to become a mainstream commercialized product for Huge—and a way for the agency to continue the conversation around the gender gap in tech, specifically the lack of women with decision-making roles in tech development.

“Everything else has evolved to a cash- and coin-free way of life. [Look at] toll booths, parking meters and bike shares. But the tampon machine has been stuck in the past for decade,” Loffredo said. “People tell me that building Hooha is ‘innovative’ and sure, that’s really cool to hear. But I honestly think Hooha is a pretty obvious idea. The fact that the tampon machine hasn’t evolved like everything else is blatant evidence of period stigma and the gender gap in tech.”

To use Hooha, people can text a code shown on the device to a universal number, activating the machine to dispense a free tampon. The purple and white machines hold up to 60 tampons, which is three times more than the industry average. Hooha also has a window to display the stock level, which you won’t find on old-school dispensers.

Bringing it to the real world

The Brooklyn-based agency launched Hooha on International Women’s Day at SXSW, where the agency used two panel appearances to discuss the innovation and how it addresses women’s roles in tech development.

Since SXSW, the agency has temporarily installed the machine at 17 other events and conferences around the world, including Cannes Lions, Tech Take Toronto and All Things Go music festival in Washington, D.C.

Permanent dispensers are currently in Huge’s offices and the agency’s Atlanta cafe, which it opened with Brash Coffee in November. According to Huge, Hooha has garnered 235.4 million PR impressions to date.

The past year was about generating press and excitement for Hooha and starting conversations around women in tech by bringing it to events, said Pete Stein, global CEO of Huge. In 2020, Stein hopes the agency can scale the machine for mass production.

“We’re at the stage of continuing to get the message out there about the need to have a diverse and balanced point of view on technology. We think this is a pretty good platform for doing that,” Stein said. “Now we’re looking at commercialization options. We want to bring in the right kind of partner to help, who cares about this issue.” 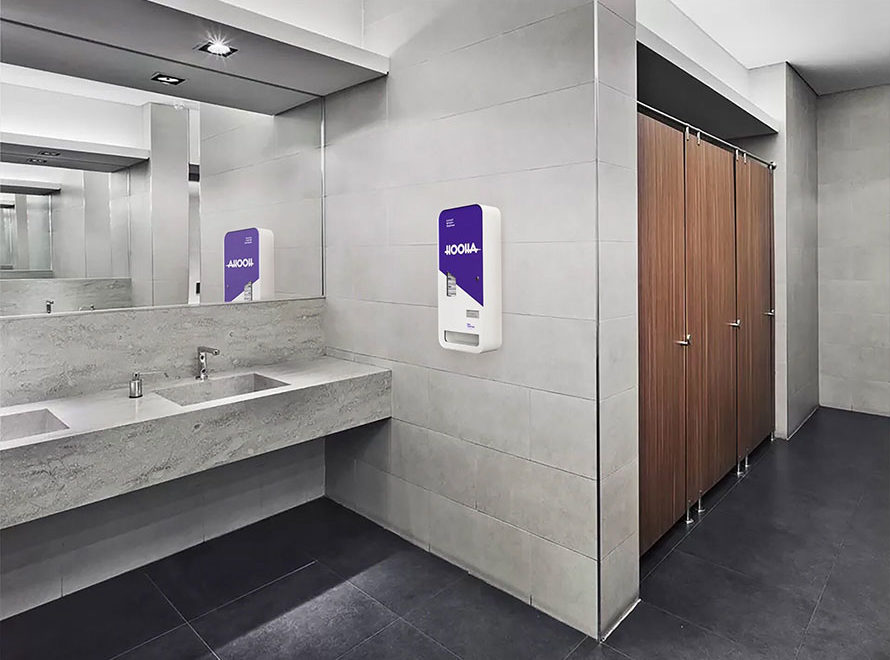 Huge wants to have the dispensers in public restrooms around the world by 2021.

Looking to the future

Stein said Huge has focused on getting partnership interest from CPG brands through inbound requests rather than traditional business development pitching, as the project began with a small budget—each dispenser costs around $50 to manufacture. Huge said it has received six inbound inquiries from potential partners this year.

Huge is also having conversations with real estate developers, according to Stein, as it wants to eventually bring the machine to school districts, nonprofit offices and sports stadiums. Stein noted the Golden State Warriors have expressed interest in getting the machine in their new arena.

Stein said that going straight to venture capital funding is the third option for Hooha’s potential growth. The agency’s goal by 2021 is to place Hooha machines in major corporations, schools and public restrooms around the world.

Cyber Weekend Is No Longer Just For Big-Box Retailers – Adweek