Go ahead and make those sweeping resolutions for 2020, like hitting the gym in beast mode seven days a week and going cold turkey on the drive-through. It’s good to have goals.

But the Ritual vitamin brand has two words for those of us who may be over-eager—and guilt-ridden—this time of year: Baby. Steps.

Execs at the female-targeted, direct-to-consumer wellness company know that change is hard. That’s why they’ve launched a campaign to shrink the issue down to (pint) size, putting up tiny yellow billboards with the tagline, “Start small.”

The idea is “to encourage everyday progress,” says Katerina Schneider, founder and CEO of the subscription startup known for its clear capsules and transparent glass bottles. “The brand’s belief is that small changes are easy to make and stick with and, ultimately, they result in big positive, cascading effects.” 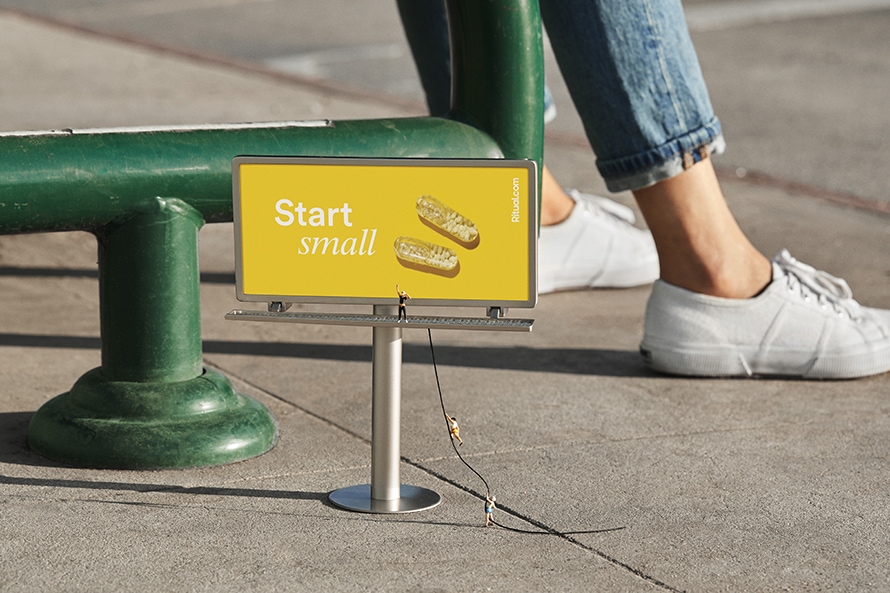 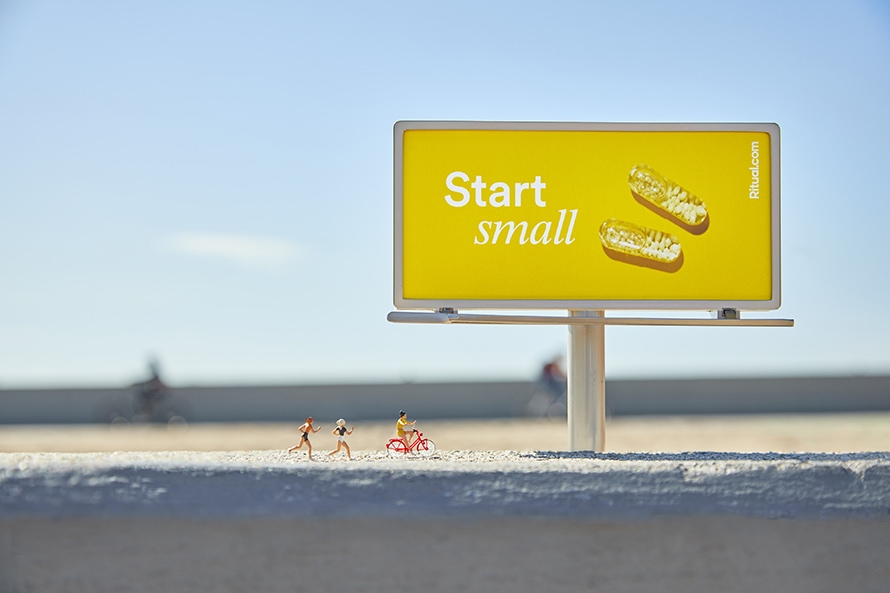 It’s a situation that repeats itself every January. For those of us who make resolutions, 50% put objectives like, “I’ll exercise more,” or, “I’ll get fit/lose weight,” at the top of our lists, according to YouGov. There may or may not be a plan in place to make that happen. Taking a vitamin, though, is a simple move in a healthy direction, Schneider says.

“We’re a habit company—our mission is to turn healthy habits into a Ritual,” she says. “67% of our customers never regularly took vitamins as adults, and we’re changing that. We’re hoping that this campaign inspires women to start other healthy habits beyond taking Ritual every day.”

In that respect, Ritual’s approach is similar to the more high-profile DTC brand Quip, whose most recent marketing has focused on creating healthy habits rather than trying to argue the company’s dental products are superior to others. 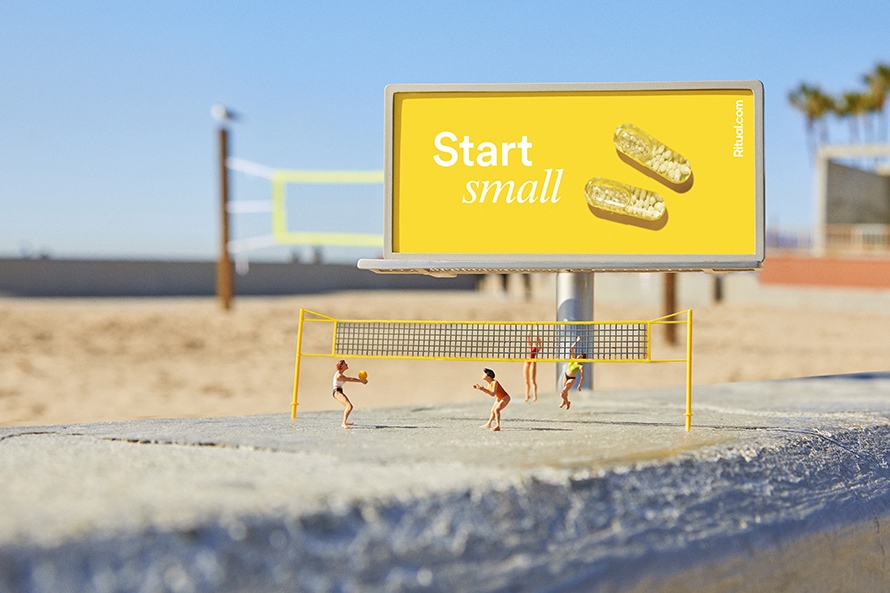 Teeny billboards aren’t a new phenomenon, but rather a way for Ritual to lean into a creative trend of the past several years that’s shilled everything from Marvel’s Ant-Man and the Legoland theme park to Sony PlayStation’s LittleBigPlanet game and the Smart car.

Interns at BBH New York created “Small Billboards for Big Causes” in 2015, partnering with PETA and Unicef, among other nonprofits, and Johannes Leonardo kicked off “the world’s smallest ad campaign” for MassMutual last spring at the Kentucky Derby (where the tiny ads could be seen using the binoculars that are ubiquitous at Churchill Downs).

Ritual’s petite ads are strategically placed where people are known for their showy, outsized feats of athletic prowess and general swoleness, like Muscle Beach in Los Angeles. (The location is a landmark for locals and a magnet for tourists, drawing lots of spectators who aren’t necessarily ripped.) Additional high-traffic spots like the Santa Monica Boardwalk, Culver City stairs, Lincoln Heights’ Albion Riverside Park and downtown L.A. transit stops also got the ads. 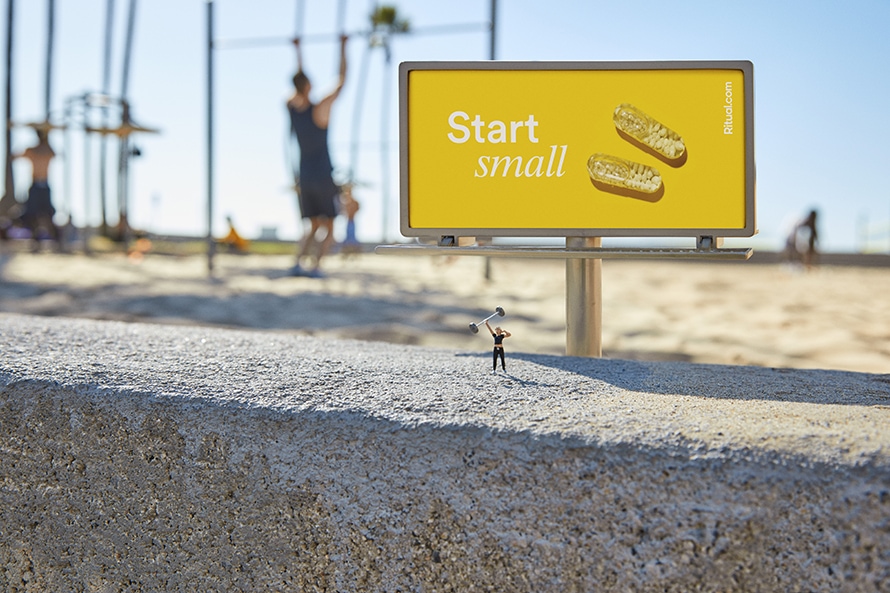 Along with the itty bitty billboards, there are accompanying diminutive action figures lifting weights, running, climbing and playing volleyball. The whole diorama is highly ‘grammable, drawing on the brand’s social media roots. Images of the scene, from photographer Randy D. Rosario, are running on digital, email, website and social, with Pinterest banners including tips for starting small. 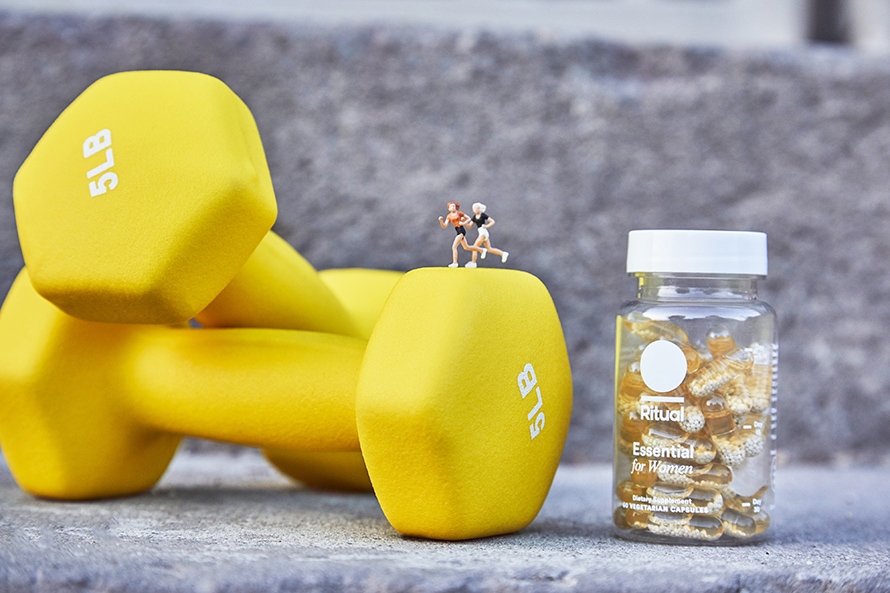 Multiple Topics vs One Topic for an Affiliate Blog ⋆