Pew analyzed over 1.1 million tweets from a random sample of 2,427 U.S. adults between June 8, 2018, and this past June 9, and it found that 97% of tweets from that group that mentioned national politics came from just 10% of the people in the group. 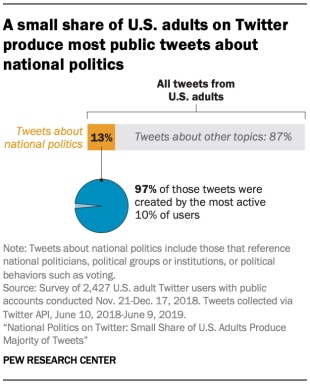 Pew found that while content explicitly related to those issues accounted for just 13% of the tweets it analyzed, 39% of those users tweeted on those topics at least once.

Disapproval of President Donald Trump drove people to their smartphones and keyboards, as Pew found that members of the test group who shared that sentiment were behind 80% of all tweets and 72% of tweets mentioning national politics.

According to Pew, 55% of U.S. adults on Twitter strongly disapprove of Trump, compared with just 48% of the general public, while 15% of Twitter users strongly approve of the president, versus 29% of the public overall. 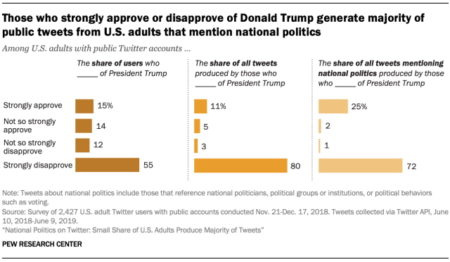 Other findings by Pew included: